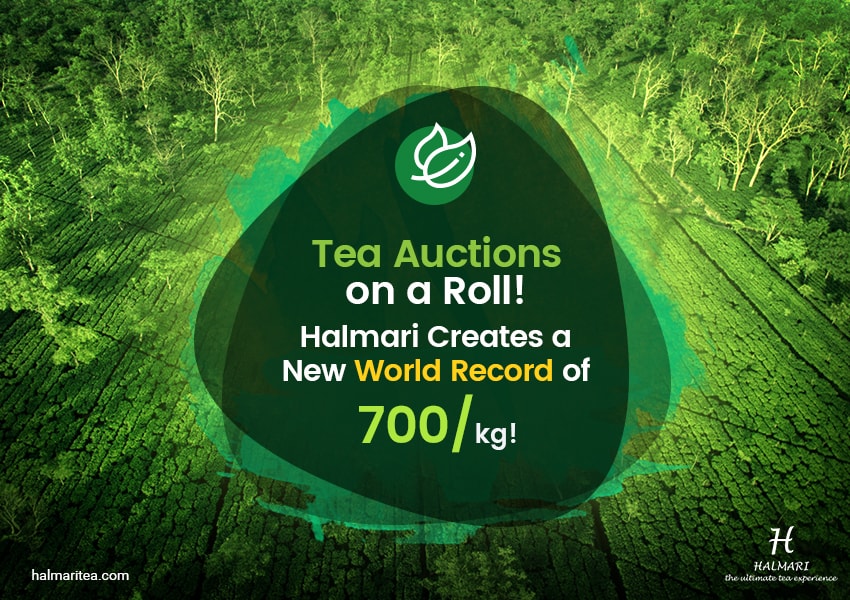 Setting a world price record of Rs.700/kg for its CTC grade of Tea at the Calcutta auction last month, Halmari beat its own previous achievement by creating a new global record in prices. Purchased by Thomas & Co. along with Mahabodh Tea House (307 kilograms bought), Halmari expects its brew to sell at a price ranging from $15 to $30.

Halmari’s first flush BOP (Broken Orange Pekoe) record broke its second flush’s record set in July 2016. The previous price was INR 600 that is $9/kilogram. Teas of such grades usually sell below $5 per kg.

It was feared that, initially, the first flush of Darjeeling tea would not stand up to Nepal’s tea heritage in the international market as it is produced in a limited quantity. However, buyers starting from France, Germany and the UK proved the speculation wrong by splurging generously on Darjeeling first flush. They drove in price rates 10% higher than what was expected.

In China, seeing the recent tea magnetism, the Economist’s Intelligence Unit predicts a rise of 4.8% in tea demand per year for 2018-2019. Since tea is not auctioned in the Land of the Dragon, pricing of tea has become much favorable.

Bidders from Japan and Sri Lanka sited how their tea auctions created new benchmarks creating unbelievable records. Lee Rhoads, a Japanese trader, talked about how 1 kilogram of tea that has been hand-rolled earned $102,200 (INRs 685,850) at an auction held on April 26th drawing 1000 bidders.

A local tea producer, Kazuhiko Takeda said, “The tea of this year is extremely aromatic and so more fuller-bodied that its quality is certainly a stand-out.”

Following the trend, the Colombo auctions at Sri Lanka have also seen a healthy rise in their tea prices bringing at average costs of $4.27 in 2017. This price put the way ahead than any other leading tea trading city in the world.

“Production of tea had a strong comeback after the major landslides and flooding which occurred in May 2017. The entire year tea production rose by 5% despite the heavy downpour,” explained a local tea producer.

Coming back to India, tea exports rose by 3% at the beginning of 2018 following price increment of Sri Lankan and Kenyan teas. As a result, Indian teas became more competitive in the international market.

The orthodox brew price saw the biggest turnover claiming to be ‘the ultimate turning point for Indian tea exports.’

Azam Mone, Indian Tea Association’s chairman, commented that Iran and Iraq would prove the major two orthodox tea destinations this year. Following the trail, countries like Egypt, China and others have also emerged as high Black tea exporters in the global market.

Both Darjeeling and Assam tea have seen a healthy revenue generation. Seeing a downfall in tea production last year for which they faced economic problems, Darjeeling’s tea planter’s comment on how the scenario has now changed.

“The weather has been a God’s gift to us. With sufficient rainfall and sunlight, the harvest from the first flush has brought in tremendous auction result from all over the world,” commented Raju Lama, Darjeeling tea exporter.

With a hike of 70% in tea production, the ergo impoverished Darjeeling tea gardens have finally seen a positive outlook.

India became the highest tea exporting country in 36 years with an increase of 8.2%. The healthy growth in its exports is expected to fuel the market even higher. Currently, the value stands at $705 million (INR 4,732 crores).